We’re in typical mid-winter southwest Florida fishing conditions. I tell my clients my goal this time of year is to have good action and catch a variety of species. That’s one of the things I love about saltwater fishing is the variety of species and the diverse marine ecosystem in and around the marine environment.

The live pilchards (minnows, scaled sardines or white bait) don’t work as well when the water dips below 70 degrees so we use live shrimp and jigs. There are quite a few different ways to fish live shrimp including freelined, freelined with a split shot to get it to sink some, suspended 3-4’ under a float, attached to a jig or just a piece of shrimp attached to a jig head. All can be effective and sometimes one technique works better than another.

The fishing in Naples, Marco Island and in Florida is affected by the weather and has been typical this winter with cool or cold fronts passing through every week or two. This drops the water temperature and can stir up the water but usually only lasts a few days and then the wind clocks back around to the east and the weather settles down and warms up again. It’s a fairly consistent pattern.

One of my favorite species that comes through every so often is Bonita as we call them although they are actually false albacore or albies. They are a true pelagic species loving the open water of the Gulf of Mexico. They travel in schools or packs as I call them, marauding bait fish as they go. To locate them we often see birds first as they are chasing the same baitfish the albies are. The albies chase the bait fish to the surface and the birds chase them from above. Albies are real screamers and definitely the best fighting fish we have. On a recent trip we got into them chasing baitfish in a feeding frenzy as far as the eye could see. It was quite a sight.

I’ve noticed the osprey sitting on eggs on their nests recently which to me is the first sign spring is coming. Yes, still a ways off but I look forward every year to the arrival of tarpon, sharks and bigger fish the warmer weather and water brings.

Fishing in Naples and Marco Island, looking forward we’re just coming off the new moon so we have good strong tides now and for the next week or so. Good incoming tides in the morning and afternoon falling tides. During the high tides we fish shoreline for snook, redfish and snapper and during the lower tides we sometimes fish the troughs and deeper cuts for trout and pompano.

Currently booking May & June tarpon trips. Plenty of dates available. See calendars below to see best tides and availability. Many clients stay at the Bay Front Inn Hotel on Naples Bay surrounded by cool bars and restaurants and within walking distance to Fifth Ave. and downtown. Best thing is I’ll pick you up at the docks behind the hotel in the morning. Trips are a minimum of six hours.

Feel free to give me a call, text or email if you’d like to talk about fishing. 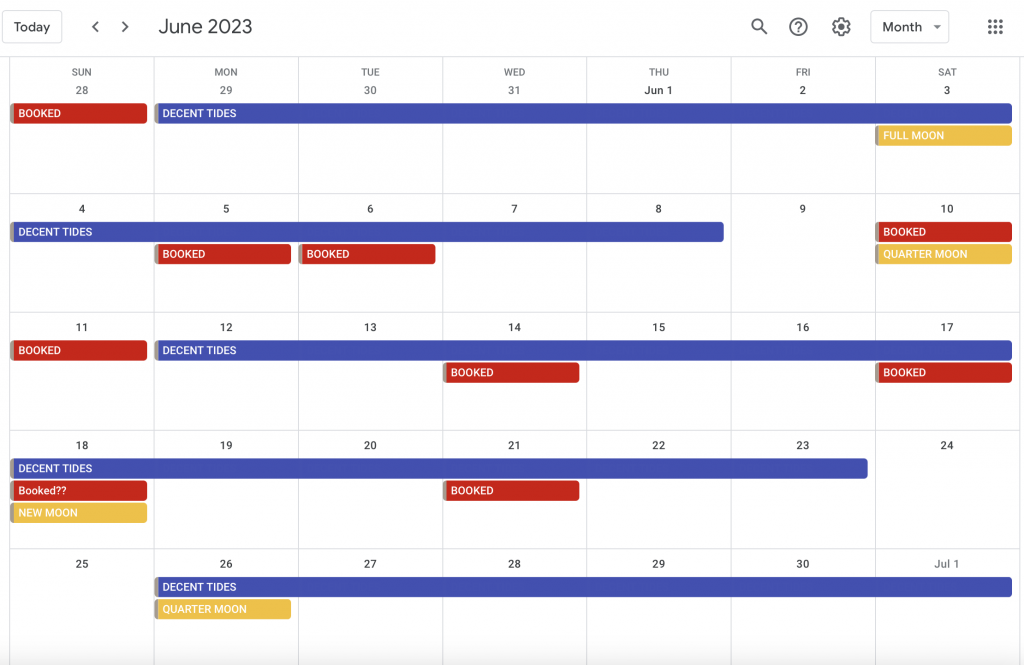 The false albacore (Euthynnus alletteratus) goes by many names—little tunny, fat albert, bonito, spotted bonito—but whatever anglers call it, the species is prized for its blistering runs and sheer power. One of the smaller members of the Scombridae family, the false albacore is not a “true” tuna, of the genus Thunnus, and is, in fact, more closely related to the mackerels. The species’ streamlined body, powerful tail, and pelagic lifestyle make it pound-for-pound one of the most powerful game fish a light tackle angler can get into.

False albacore are the most common tunas in the Atlantic Ocean, and their range extends from New England to Brazil and from Great Britain to South Africa. They are also found in the Mediterranean and Black Seas, where the average fish is much larger. In their northern range, they average 10 to 12 pounds, whereas fish caught off North Carolina often approach the 20-pound mark. The world-record fish, caught in the deep water of the Washington Canyon off the coast of New Jersey in 2006, weighed an astonishing 36 pounds and was 48 inches long.

Although they are classified as a pelagic, or open-water, fish and travel in very large schools, false albacore prefer relatively warm water and spend much of their lives in near-shore and inshore waters, making them more available to anglers, especially in autumn. They can often be found wherever baitfish congregate—in inlets, around jetties, and sandbars. Baitfish make up the majority of the albies’ diet, although they will also feed on crustaceans and squids. Like other fish that feed in schools, false albacore will drive bait to the surface or into shore in order to concentrate the food.

Like most tunas, albies lack a swim bladder, which means they must be in constant motion, which explains their phenomenal swimming power. They are fast-growing, but short lived, reaching sexual maturity at one year of age and 15 inches but rarely living more than five years. Spawning occurs in deep, offshore waters from April through November. The flesh of the false albacore is dark and coarse in texture, so few people in the U.S. eat it, although it is consumed in other parts of its range.

The first big cold front of autumn usually kicks off the annual blitz of false albacore, which then travels southward along the Atlantic Coast. Big schools move into Vineyard Sound, off the southern shore of Cape Cod, in September. Whereas the species was once considered a “trash fish” by Florida anglers because of its poor table quality, more and more Sunshine State anglers recognize its value as a game fish when other, more glamorous species aren’t available.